I’ve been dreading March since I started training. The mid week runs are 5-8-5 miles. That means that now my mid week tempo run of 8 miles is longer that my first “long run”. The long runs themselves are stretching to obnoxious lengths of 17-20 miles through the month.

Of course the highest mileage week of our training also fell on a challenging week for me personally and a hectic week at work. I knew this would happen at some point in my training.  It did and I made it through. A significant part of training is overcoming the mental hurdles of the tough weeks. You come out exhausted, but stronger on the other side. The next time you look ahead to a week that seems insurmountable, you can look back at previous victories and know that you can make it.

Our naive enthusiasm has been replaced with a confident determination. With each additional long run we check off the list, that little voice inside us that says “You CAN do this” grows a little bit louder.

1. The Crocket Park Greenways are Gorgeous

I’ve taken my kids to Crockett Park in Brentwood to ride bikes, but I never realized that the trail system was so extensive. Though a little hilly, the trail was beautiful as it passed alongside a small river, by gorgeous neighborhoods and through a wooded area. I probably would not feel comfortable running alone there (Brentwood is known for its gang activity*), but it was an awesome group run. 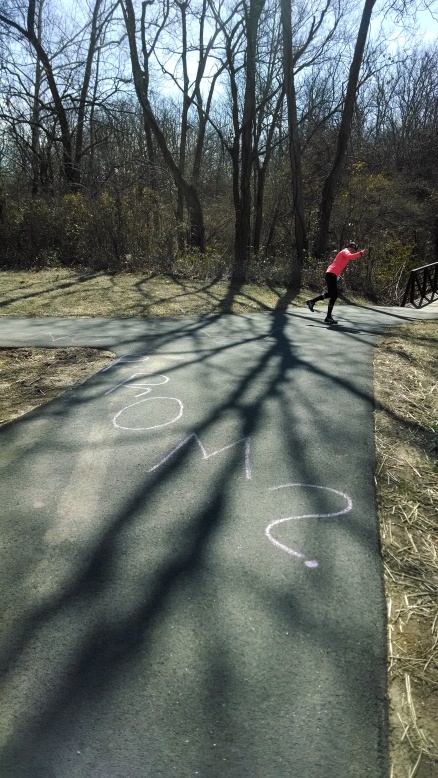 I’d heard that teenagers go “all out” thee days asking their sweethearts to prom, but we saw the adorable evidence of this on our run. As we came to a fork in the trail, a boy had asked a girl to prom with sidewalk chalk, with one direction marked yes and the other marker no. I just hope she chose the path marked yes, just as Abby did as we reinacted the scene.

3. People do strange things to their dogs

We passed a random couple with a dog that was carrying a sign that said “wide load”. That was our inspiration to keep running, so no one would need a sign like that for us.

At about mile 10 Abby got a side stitch. After she failed to get relief with the usual tricks I decided with all my advanced medical learnin’ that perhaps I could “scare away” her side stitch. I know that hiccups are spasms of the diaphragm muscle and we don’t really know what causes side stitches but they are near the diaphragm, so perhaps they could be physiologically related (this was my medical reasoning after running for 2 hours). I randomly just stopped and screamed at Abby and scared the crap out of her. She then she nearly punched me, which could have easily lead to my second assault charge. Luckily there was no violence, only a failed experiment  and some minor comic relief.

The first 2 hours weren’t bad but by hour three my legs were tired. I figure this is normal. Nothing “hurt” and by nothing I mean pretty much everything ached but I could still move so I assumed I was OK. By hydrating, stretching and making friends with my foam roller on my long run days, I haven’t been too sore afterwards.

*Not really. It has the lowest crime rate in the state, but it was a very secluded trail at points.

The Marathon is about 6 weeks away. I think if we can survive March, then we should be home free for our April taper. However, that 20 miler is still looming ominously around the corner.

View all posts by drrupe

1 thought on “Month 3 of Marathon Training: It’s Getting Serious”